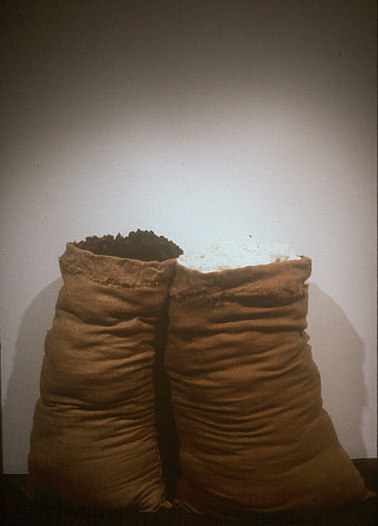 By Stephanie Anne Johnson
Materials: 2 burlap sacks, raw wool, cotton, floor boards
Size: Two sacks approx. 5' high, 72" in diameter
Date: 1999
In my work, I am always examining the relationship of the materials to the words, myths and histories with which they are associated. "Innocent as a lamb" and "cotton pickin' hands" come to mind in this particular piece.

After the legal end of slavery in The United States, the former slaves were offered the option of "sharecropping". In this system, the workers were given a portion of land and/or a portion of the profits from the sale of the crops they had harvested. To offset any possible benefit to the people from this "offer", they were charged for the shacks they lived in on the land, the food they ate and other necessities. Consequently, there was very little profit left over for these "free" people and they remained indebted to the landowner in a system which resembled feudalism.